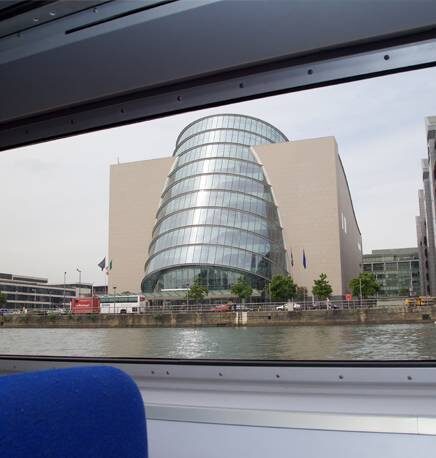 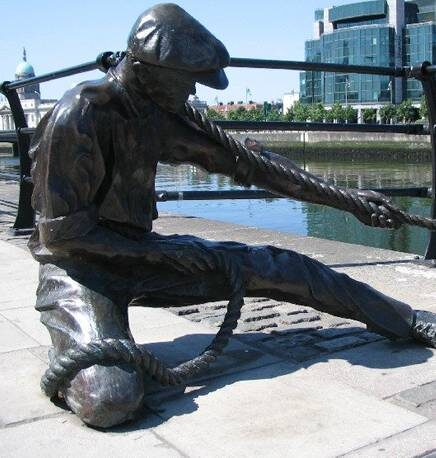 Dublin Docklands (Irish: Ceantar Dugaí Átha Cliath) is an area of the city of Dublin, Ireland, on both sides of the River Liffey, roughly from Talbot Memorial Bridge
eastwards to the 3Arena. It mainly falls within the city’s D0 and D02 postal districts but includes some of the urban fringes of the D04 district on its southernmost side.

In the late 20th and early 21st centuries, the docklands area was regenerated as an extension of the business hub of Dublin’s International Financial Services Centre (IFSC). By 2008 the area had over 599 enterprises. While growth slowed considerably due to the post-2008 Irish economic downturn, since 2014, property values and development activity has made a recovery.

New infrastructure, built in the area in the 21st century, has included the Samuel Beckett Bridge and the LUAS Docklands extension. Venues, including the Bord Gáis Energy Theatre, the refurbished 3Arena and the Convention Centre Dublin are also in the area.

In the past there was little contact between the communities on both sides of the river. Until Butt Bridge opened in 1879, Sackville Bridge (now O’Connell Bridge) was the nearest crossing-point, so people relied on the Liffey ferries to cross downstream. Until 1930 Ringsend was part of Pembroke Township, which was home to some of the wealthiest households in the Dublin area. In that year it became part of Dublin City.

The traditional Dublin industries, such as poplin and silk were located in the neighbourhood of St. Patrick’s Cathedral. When these industries declined after 1800, the population fell in older parts of the city. In Docklands by contrast the population increased steadily throughout the nineteenth century, and the vacant land was gradually covered with houses and commercial properties.

When the Custom House opened in 1791, Ringsend was the only part of this area that was developed. The remainder consisted of low-lying wastelands, which had been divided into lots – or lotts – by the Ballast Office. As the port expanded downriver, this land became more valuable. People and businesses moved into the Docklands, attracted by the prospect of jobs and the large tracts of underdeveloped land.

Some of the larger employers, like the railway companies, built housing for their workers. Speculative builders erected small cottages in the lanes and back streets to cater for the rising population, but commercial and industrial development took precedence and the houses were occasionally demolished to provide sites for warehouses or other business premises and housing standards were generally poor.

Things to do in Dublin Docklands

This is the Diving Bell, a piece of engineering art for building deep water quay walls back in the 19th century . Available to visit Free of charge in the Docklands

Located in Dublin's Docklands, this museum covers the history of the Irish diaspora and emigration to other countries.

Discover Ireland's dark history Follow in the footsteps of those who fled the Famine.

What Visitors Say About Us

Don’t just take our word for it...

Great way to spend an hour in Dublin

Very pleasant way to spend an hour in Dublin’s Docklands area.Entrance includes a guided tour provided by a local resident.

Just had the experience on the boat..amazing.Very well done great information and great fun.Jerry or Gerry..was the guy.He was helpful and so much fun. He’s very genuine and you can see he actually enjoys what he does.Gerry thank you for letting my daughter steer the boat..realy appreciate it..

A brilliant tour and experience! Garoíd out tour guide was so full of knowledge and very good at what he does! He was very interactive with his audience! This is a tour well worth a visit!

Well worth the money!

Perfect little cruise on the river Liffey. I learned so much more about the history of this part of Dublin, thanks to John and Gerry for the experience.